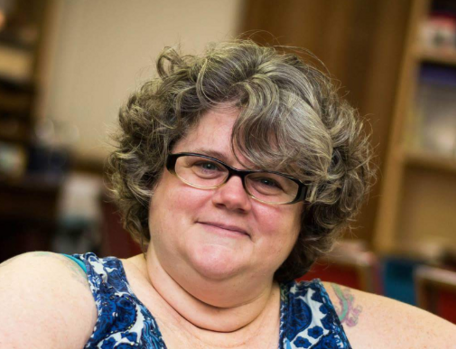 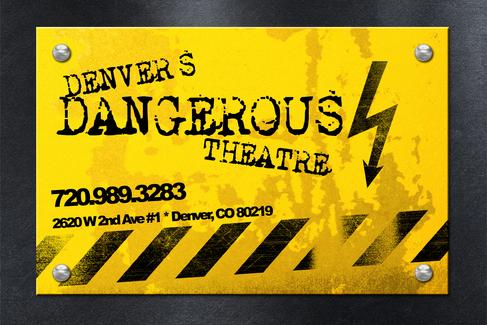 The short answer is because it is a dangerous proposition to make a living in theatre.

The long answer is that Dangerous Theatre is not like any other small theatre venue out there. Why? For starters the theatre is owned and operated by a single person. Me. Winnie Wenglewick. Yes, I'm aware that my name sounds like a Disney character, which is only fitting considering I got my start in theatre in Orlando, Florida.

I moved to Orlando, FL in 1990 from upstate NY because snow is not my friend. Soon after my arrival, my roommate won tickets to an improv show at  SAK Comedy Lab. The show was so much fun I ended up volunteering there. Then, the owners of SAK started the Orlando International Fringe Theatre Festival in 1991. The Orlando Fringe is now the oldest running Fringe in the US. This is all Terry Olson's fault.

IT ALL STARTED WITH TERRY OLSON AND THE ORLANDO FRINGE

I loved SAK Comedy Lab. I loved everyone at SAK, too. I started out as a volunteer. Then I became a house manager and even helped some with marketing. Then Terry Olson, Andy Anthony and Rick Kunst started the Orlando Fringe because SAK had performed at some of the Canadian Fringe Festivals and there wasn't one in the US yet. When Terry asked me if I wanted to help with the Fringe I had no idea it was the beginning of what would be a lifelong passion and career. For the first 10 years of the Orlando Fringe I trained volunteers, sold advance tickets, worked at the venues, worked in the cash office and became the cash office manager. During that time Fringe was located downtown and the theatre spaces were created out of empty store fronts. It was at Fringe where I developed my love for small, intimate, bare bones theatre spaces. From working in the cash office I got to know many of the performers and developed my love for actors and playwrights and for new, original works.

In 1998 I was looking for a space to put a hair salon in. I ended up finding a space on Mills Ave that was bigger than I wanted but I had this wild idea. What if I opened a theatre space and put the hair salon in the back?  That is exactly what I did when I opened Performance Space Orlando. PSO, as it came to be known, was a versatile space available for rent to anyone for anything. It housed plays, improv and sketch comedy, art shows, classes, workshops, rehearsal space.... and I did hair in the back at Neon Salon. Unfortunately, I closed the the space in 2000 after a dispute with my landlords over the lack of air conditioning at the space.

After closing PSO and NEON SALON I ended up in Denver, Colorado. My ex-husband had moved there and my daughter was not happy with mommy and daddy in separate states. I went to visit Denver over Christmas in 2000 and discovered there was not as much snow as I thought there would be and what a huge theatre scene they had. I moved there in June 2001 hoping to produce a Fringe Festival in Denver. I never did get the Denver Fringe off the ground but I planted the seeds and there is a Boulder Fringe. In 2002 I formed the Sick, Twisted & Wrong Comedy Troupe and started producing comedy shows. In 2004 I started renting venues and producing plays. I discovered that moving from venue to venue makes it very difficult to build an audience or get media attention. In March of 2006 I had the opportunity to take over a private social club from a friend. I only did so because I knew I could also produce theatre in the same space.

I ended up running the social club until I knew the landlord would give me my own lease. Once that was confirmed I opened Denver's Dangerous Theatre in August 2007. The focus of Dangerous Theatre has always been to produce new works, unpublished works, works that might otherwise not be staged. I like working directly with the playwrights. I started off primarily directing. But now I find myself on stage as much as off. I can do that because I own the theatre. Between 2007 and 2015, at Denver's Dangerous Theatre, I produced over 25 productions, directed most of them, acted in some of them and wrote a few of them.  Ultimately, theatre is a very selfish endeavour for me. I am NOT a non-profit. I do NOT have a board. I'm too bossy a bitch for a board. I like the freedom to produce whatever interests me without having to keep within the confines of a specific mission statement or audience demographic.

In 2015 I moved back to central Florida for family reasons. At first, I looked to open a second location in Orlando. A friend introduced me to Historic Downtown Sanford, about 30 miles from Orlando and I fell in love. I found a historical space in Sanford that had previously been a theatre and opened a 2 stage space in 2017. While I loved the space and Sanford, family needed me back in Denver so I returned to the cold and snow in January 2018. If you are going to move back to Denver from Florida, I suggest you NOT do so in January!

With my return to Denver, I am looking at making some changes to Dangerous Theatre. While I still plan to focus on bringing new, original  and daring works to the stage, I also plan to start looking at adaptations of the classics. Someone once told me I had "power" because I owned a theatre. I didn't really believe him at the time, now I see how lucky I am to have a stage of my own and plan to write more myself and perform more solo shows. I also plan to expand Friday nights to be more like a comedy club with offerings of sketch, improv and stand-up. So keep an eye on what we are doing. You might find something you like. I  hope to see you at the theatre. Please feel free to introduce yourself. ;)

Can I just say, this whole pandemic really sucks big, hairy, donkey balls for small venues. All of us are trying to figure this out. Some venues closed. I have no employees so no PPE loans. My credit wasn't good enough to even get an SBA loan. So I have to figure out how to pay the bills and stay open. I have no intentions to close and will fight to the end. However, it means lots of changes at Dangerous Theatre. Prior to this clusterfuck I could seat 50 with little cabaret tables and it was a fun, cozy little space. I felt that the option of putting a plexiglass barrier at the front of the stage would not work in my venue. That means the audience has to be 25ft from the performers and seated socially distanced. I only had about 25 ft from the front of the stage to my back wall. That wasn't going to work. For starters, I got rid of most of the stuff I had in storage that was hiding behind big red curtains, so I could expand seating at the back of the theatre. That gave me room for 5 to 6 tables with 2 at a table. Then I took our most of the wall into the middle lobby area to expand the seating, adding 4 more tables. So now I can seat 10 or so tables.

Over the past year I have tried live streaming shows. It was just a technical pain in the ass because I only have myself and I am not technically inclined. We recorded some shows for people to watch on demand from the comfort of their own sofas. Again, I didn't have the greatest equipment and technical ability to do that well and won't go that route again. Now that folks are getting vaccinated, I figure I can try a live comedy show on Friday nights.  I have worked hard to make the venue the safest option for indoor entertainment. My seats are vinyl and tables are plastic thus easy to disinfect after every use. I installed a huge vent fan so right after a show I can open the doors and run the fan to bring in fresh air. I purchased UVC lights that I can run to kill the damn virus in the air and on soft surfaces like carpet, curtains and sofas. I'll still do all the other usual... I check temperatures when folks arrive, require masks, attendees are immediately seated in the theatre socially distanced. I'm even going to offer a show only for folks who prove they have gotten the COVID vaccine. So.... come see a show if you are feeling up to a night out. Please and thank you.